A land of giants and saints, pirates and piskies, Cornwall is a county full of folklore and traditions. With almost every village and town in the county playing host to unique festivals throughout the year, traditional and cultural celebrations are joyfully upheld with each generation.

Of course, Christmas in Cornwall is no exception to this: a time when communities come together and share in festive merriment. As well as common past-times, Cornwall has many of its own Christmas traditions too, from Star Gazey pies to haunting sea shanties to mask-clad Guisers dancing through towns.

Here are just some of our favourite Cornish Christmas traditions.

Christmas 2021: Due to Covid restrictions this year, some Cornish Christmas traditions may not be happening in full force this year. Events and gatherings are likely to be cancelled. Please check with organisers before visiting.

The Montol solstice festival is an annual festival held in Penzance on the 21st December (this year’s celebrations are postponed until 2021). Traditionally the day of the feast of St Thomas, the date also coincides with the winter solstice which, since pre-history, has been hugely important for marking the symbolic death and rebirth of the sun. A reinterpretation of old Cornish rituals, the Montol Festival is celebrated each year with performances from fire breathers, ‘obby ‘osses, Guisers and musicians in the day and Christmas carol singers, choirs, dancers and markets in the evening. Oh, and a glass of mulled wine (or two).

Mummers’ plays are folk plays traditionally performed by troupes of amateur male actors from the local community. Although the plays vary slightly and can be adapted from year to year, the general gist involves a number of characters who are called ‘on stage’ (or pub floor) in turn, engaging in a witty repartee that eventually evolves into a dual. Well-known Mummers’ plays are held on Boxing Day and New Year’s Day in Padstow and on Boxing Day in Cadgwith.

The Cornish need little excuse to bring pasties into the equation, so it’s no surprise that they are another quintessential feature of Cornish Christmas traditions. Be it as a post-Christmas Day swim warmer-upper, a novel way to use Boxing Day leftovers or as a treat to leave Santa Claus in front of the fire, no Christmas would be complete without these hearty parcels of goodness. 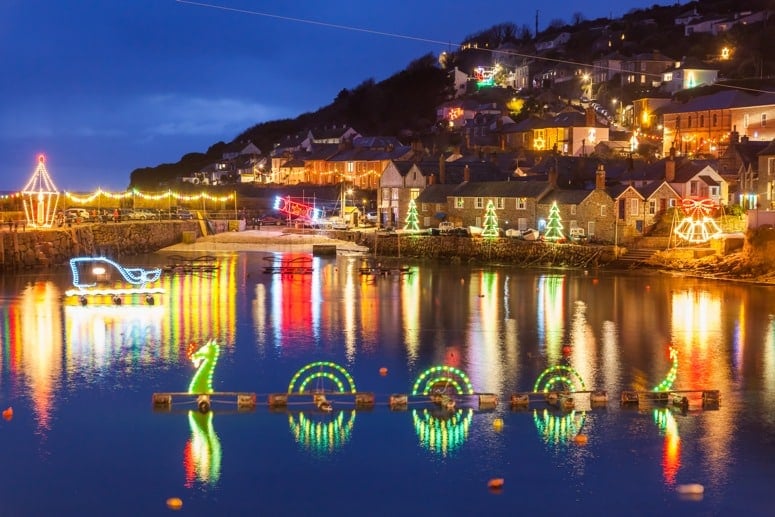 The history of Christmas lights is rooted in Pagan beliefs, when sun-worshipping pagans lit candles during the solstice in the hope that it would encourage the sun to return after the darkness of winter. These days, Christmas lights are a beloved part of Christmas celebrations all over the world. With beautiful displays lighting up the county throughout December, one particularly famous destination for Christmas lights in Cornwall is Mousehole, where bright ribbons of lights and illuminated figures decorate the harbour and scatter multi-coloured rays across the water.

Cornwall is no stranger to the centuries-old tradition that is Christmas Markets. Dating back to the late Middle Ages in Germany, these festive markets ignite nostalgic romance with the heady scents of roasting chestnuts, mulled wine and incense. The perfect place to gather up some Christmas gifts, Cornwall’s Christmas markets often have a local focus, giving Cornish craftsmen, artisans and producers the opportunity to sell their wares.

One of the slightly more immersive Cornish Christmas traditions for daring revellers are the Christmas and Boxing Day swims. Taking place in coastal communities all over the county, these swims see whole communities gather onto beaches, many bedecked in hilarious fancy dress, ready to support the brave souls taking a dip in the sea. Warmed up afterwards with blankets and hot flasks of tea, the swims give communities in Cornwall a fun opportunity to get together and raise money for charity.

The origins of sea shanties go back to the mid-1400s, when the running of merchant ‘tall’ ships, like those frequenting Cornwall’s harbours, would require the efforts of large crews of men. The shanty was quite simply a working song, created to keep a shared rhythm going during synchronised labour and, of course, to make it more fun. Over time, these songs travelled with the men from the water back to their homes, where they have remained an important part of fishing communities to this day. If you head into a local fishing pub around Christmas, it’s likely you’ll hear these haunting renditions accompanied by the rhythmic thud of feet on stone floors and slap of palms on wooden beams. 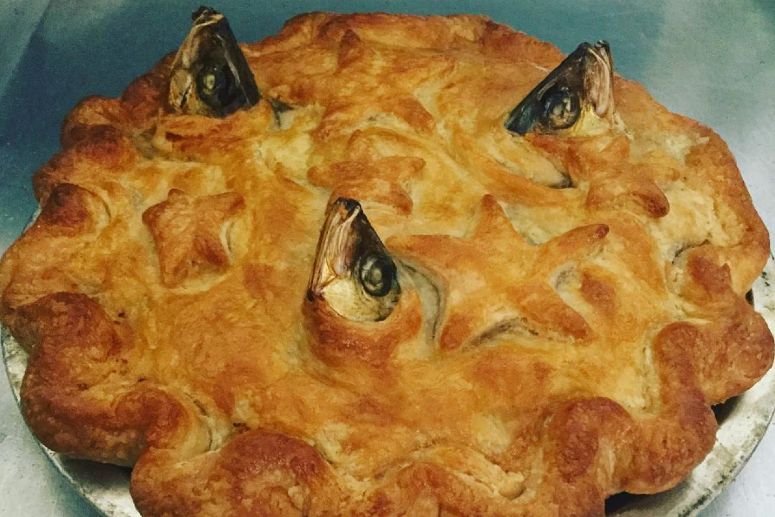 Stargazy pie is a Cornish fish pie filled with whole pilchards whose heads protrude from the pastry crust, appearing to gaze at the stars. Originating from the village of Mousehole and popularised by the much-loved children’s book, The Mousehole Cat, Stargazy Pie is eaten on Tom Bawcock’s Eve on 23rd December. As the story goes, Tom Bawcock was a legendary hero who helped to save the villagers of Mousehole from starvation in the 16th century. During a particularly fierce winter, fishermen were forced to abandon their trade and the primary food source of the villagers was lost. Unable to see his friends go hungry any longer, on the 23rd December Tom decided to battle the storms in his boat and ending up catching enough fish to feed the whole village. The catch was then bundled into one great big pie, with the fish heads poking through the top to prove they were really inside.

A very important part of Cornish culture, Guise dancing is an ancient tradition from West Cornwall that is performed during the twelve days of Christmas. Once outlawed in Cornwall due to rising anti-social behaviour, Guise dancers traditionally disguised themselves in costumes and masks and would dance from door to door performing all sorts of hijinks in return for money and food. Nowadays, there has been a resurgence in interest in this Cornish past-time and Guise dancers play a central role in Penzance’s Montol Festival – without the mischief!

A Cornish twist on the classic Christmas wreath, the Cornish bush is made by weaving holly, mistletoe and ivy around a withy middle and decorated with apples. Another tradition with Pagan roots, these wreaths are meant to represent new life and are hung indoors on 20th December. If you really want to follow this Cornish Christmas custom closely, you should top your Cornish bush with a candle and light it on the night of the 20th December, performing a small dance underneath to pay homage to the God of Light. It also may be worth noting that the mistletoe in the wreath is widely acknowledged for its traditional purpose too…